So this past week Carl was in Colorado for a work conference and about a month ago I decided what I was going to get him for his birthday. I decided on getting him a grill and I wanted to put it together with a big Red bow on it! 🙂 (First initial thought)

So I had talked with my brother a while back and he said that he loves his grill and I did some research and felt that grill was good for the price. About a month ago, I talked to my brother and asked if he could help me pick up the grill while Carl was gone to CO. So on Wednesday night last week we went to Menards and picked up the grill. It is a Char-Grill King-Griller.

On Wednesday night after we got it home, I took it out of the box and put it in the living room to put together. After looking at the instructions and all the pieces and parts, I had to re-think my decision. I swear that 90% of the instructions were words and no pictures. I even went online to see if there was a video or colored instructions. Nope, no luck. (Re-thinking my initial thought)

I was talking to my sister on the phone and laughing so hard at the fact that I thought putting it together was a good idea. I called my brother, thinking he would feel bad for me and help me. Nope, he said it took him 3 hours to put together and he’s a guy, I was thinking holy cow it’s going to take me like 6 hours then. I got most of it put together on Wednesday night and I decided I would have to finish on Thursday night-which was only about a 1/2 hour to finish. I put the grill in the garage with a bow on it.

On Friday night, I was so excited for Carl get home and open the garage door. I was on the phone with him when he pulled into the driveway and opened the door and he said “A grill, you got a grill?!” I told him it was his super early birthday present as his birthday isn’t until May. But the weather has been so awesome so I couldn’t wait longer.

I should have left it in the box and put a bow on the box! 🙂

What was I thinking?! 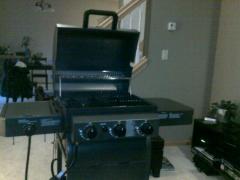 I think it is all together, at least it is still standing!

Carl with his new grill. 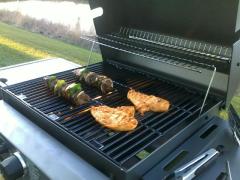