This morning I had so much love for Arie, he let me sleep until 5:30am and did not get up once in the night. We went just for a walk down our street and back this morning. I wasn’t fully awake yet and laid back in bed, I figured I would test how he would do on the bed. The other morning when I put him on the bed he started chewing my comforter. He is teething like crazy right now. So this morning I tried again and made sure there was plenty of toys for him. It was wonderful, I read my book for a few hours while Arie and Carl slept for another 3 hours.

We took a walk then when he woke up. Arie has been scared to leave the yard, Carl bribs him with treats to get him out of the yard. We went for a walk and he did very well. We met many people along the way and dogs. Everyone thought he was so cute. Well, he is! 🙂

We ran a few errands this morning to the farmers market and target. I love farmers markets, I wish they had them year round. When we got home we had to see Arie’s girlfriend Brandy. They love to wrestle, Brandy is the alpha.

Later in the afternoon, Carl went to wash his car and Arie and I took a nap. 🙂 My brother and his family came to visit again and had yummy treats for Arie to chew on. That was so nice and he loves them both. I have noticed that Arie scratches a lot at his nylon collar. My brother suggested a rolled leather collar as they don’t irritate the skin . Carl and I ran to Petco and picked up a leather collar. It looks so nice. I couldn’t pass up picking up a few more toys of course. 🙂

When we got home Carl took a few pictures of Arie while he was playing, they are precious.

It is hard to say no to those eyes, but we manage. He was interrupted during play time. 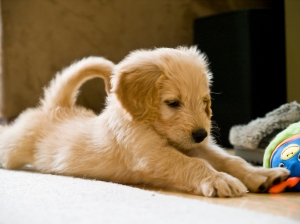 Here is are stretching while playing.

2 thoughts on “First Weekend at My New Home”