This weekend provided many firsts for sweet Arie. We had went to WI (2 1/2 hour drive) to visit our parents- two completely different places for him to experience.

Friday night we drove to Carl’s parents who have a cat named K.C. and a cockatiel named Cheerio. Arie loved playing out in the grass and sniffing all over. We had a fun night just playing and enjoying his silliness. On Saturday morning, we walked down to Carl’s dad’s store. When we walk with Arie we don’t get far too fast. He got many compliments/stops and he did so well.

Then we headed to my parents, where we were greeted with Roxie and Maggie (two Old English Sheepdogs) and Willie a poodle. Then my sister came with her dog, my brother with his dog. Arie then played with the neighbor dog (a standard poodle) and my aunt and uncles dog. Arie played with 7 different dogs and was constantly running around and playing. He got along very well with the other dogs. He really enjoyed all the ball throwing and running after the other dogs.

My sister told me when her dog goes to grandma/grandmpa’s house he is on puppy crack from all the playing. When he gets home it takes him a while to come down from the puppy high. Well, that was totally the case with Arie o the ride home and when we got home. I even took him out potty and he got to play with his girlfriend Brandy too.

Here are a few photos of tired Arie. 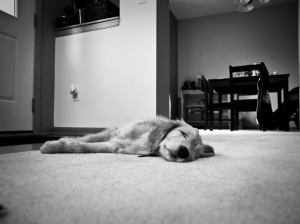 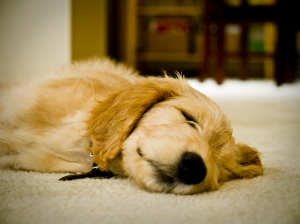 Our little sweet Arie had a wonderful weekend and is all tuckered out.

Arie is about 11 1/2 weeks old, on Tuesday he will start puppy kindergarten. 🙂

2 thoughts on “One Zonked Out Puppy”