So last week we started puppy classes, every Tuesday night for 6 weeks for 1 hour. I was such a nervous mommy, I was scared Arie would be the naughtiest puppy. When we got there, our class consisted of  about 13 other dogs that were all different breeds and sizes. However, there are two other golden-doodles in our class and then another golden-doodle in a more advanced class that I am guessing about 1yr old.

When we first walked in we met a family who we talked about dogs with. We both said our dog is a golden-doodle and is 12weeks old on Thursday and went our separate ways to socialize with the other puppies. During the class this other cute little golden-doodle was seated across the circle from us. I couldn’t stop looking at him, he was round and fluffy. At the end of the class we spoke with the family again, Carl asked where they got their puppy. Low and behold, they said south about an hour, my mouth dropped and then we realized that Arie and this puppy are brothers! 🙂 The other puppy’s name is Griffin. Griffin has fluffy soft fur more poodle like, where Arie’s is more straight and matted down like a golden retriever.

The other golden-doodle is 4 months old and he is black. He is so cool looking that I want to get a black golden-doodle. His name is Sampson.

We got a few pictures of the doodles playing! 🙂 We might have to set up puppy play dates after classes are done. 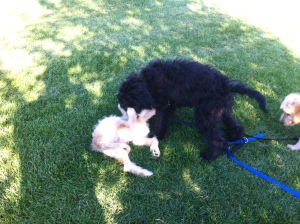 Arie and Sampson (about 4 months old) playing. I love the black golden-doodle 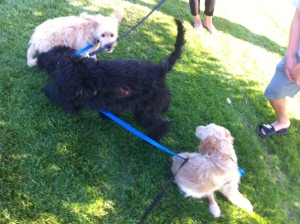 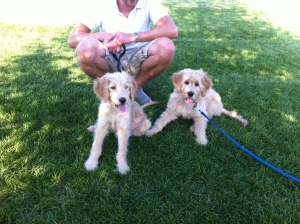 Arie and brother Griffin! 🙂 They are so cute together. Not sure if they can tell they are brothers.