Over the weekend Carl, I and our friend traveled to the Eastern side of Wisconsin to watch our close friends from college say ” I Do”. They are so special to us and we were so happy they invited us to be apart of their special day. I have never been so far east in Wisconsin before that I literally got to see Lake Michigan. 🙂 It was so beautiful and fun to experience.

The weekend was perfect and fun to see all the college friends. We had dropped Arie off with grandma for the weekend, to play with my parent’s dogs. We drove about 3 1/2 more hours to the wedding. We arrived on Friday afternoon. That night rehearsal was at 5pm and then a pizza buffet for dinner.

Here are some pictures another friend took that night.

Carl and I with the bride and groom. We love you two! 🙂 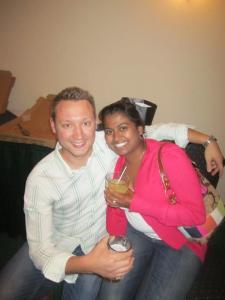 Carl and I at the rehearsal dinner. 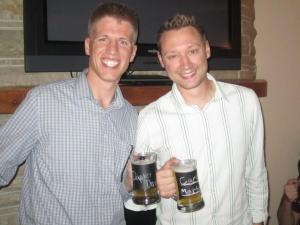 Carl and the groom with their mugs.

Carl and the bride with his cool new apron. It says (Carl Master of the Grill). 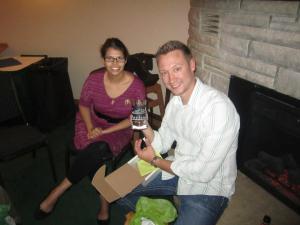 Carl received this mug from the groom, the black is for writing on the mug with chalk. 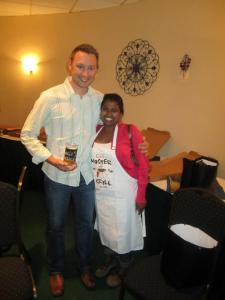 Carl and I, me with the cool apron. 🙂

On Saturday morning the guys  got up early and went to the shooting range to go trap shooting. Then they returned and had to get ready. All of the guys looked so handsome. All of the wedding party had went to college together and met freshmen year. The grooms’ side had a best man and two groomsmen, the bride’s side had the maid of honor and a bridesman- AKA Carl. Both the groom and bride had to choose who would get Carl on their side. The bride won! 🙂

Carl walking down the aisle. His college roommate sitting in the chair was an usher, I like this photo because of all the smiles. 🙂

Carl was so handsome. 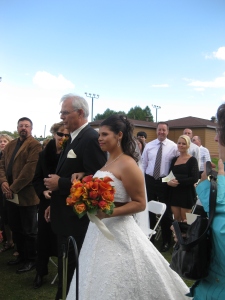 The bride and her father walking down the aisle. She was one of the most beautiful brides I have seen and honestly it a lot of that is because of her personality! 🙂 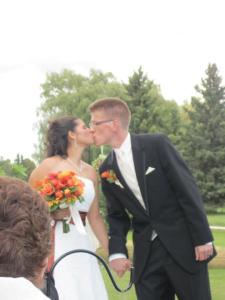 The happy couple Mr. and Mrs. They are the kindest, funniest, goofiest couple I know. 🙂

Me and the usher, what a great guy!

Carl and I after the wedding.

It was a perfect weekend filled with friends, memories, love and lots of laughter.

Congratulations to the happy couple.