Weekend wrap-up. I bet you all are wondering about the “snip snip” part of the weekend and of course how yummy the pie was!

Well, Thursday night Arie was on laying on the bed getting belly rubs and Carl thought there was a cocklebur on Arie’s wee wee. Then I looked and it didn’t look like cocklebur, it looked like june bug sized scab on his wee wee. ( Poor Arie, a little embarrassed)  I was nervous as it looked infected and I didn’t want Arie to have a urinary tract infection.

I called Friday morning to the Vet and got an appointment Saturday at 4:30pm. When we arrived there they took a look at Arie’s wee wee and said oh, we will just cut it off, it will take about 15-20 minutes and then we will have to just put a cream on it. We also had Arie weighed, he is 56 pounds! He’s a big boy and still growing.

When we got back to pick up Arie, they said he did just fine and they didn’t see anything wrong with him and they weren’t sure what the scab was. This morning the Vet called me to see how Arie was doing (we have a good vet), I said he hasn’t skipped a beat and he is doing well.

As we were driving home, we felt bad for Arie and Carl got him a treat for being so good at the Vet. 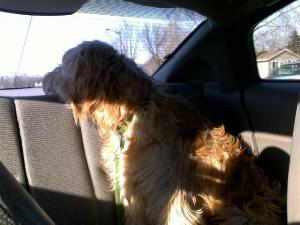 This is Arie’s picture on our way home. “You took me to the vet to get the scab cut off my wee wee, thanks mom and papa.” We felt so bad for our little boy but he did so well. I sent the picture to a few of our family members, both Grandma’s called to check in on their Grandpuppy and wondered what the heck we did.

While we waited for Arie to get his unexplained scab removed, Carl and I ran to the Valley Natural Co-op nearby during that time.

Enough of that, now on to the best part of the weekend. Earlier in the week, I decided I wanted to try to make gluten free French Silk Pie. I was nervous to make it as I would have to the make the crust from scratch. I then called the Co-op and asked if they had pre-made GF crust, I was in luck they did! 🙂 I picked up two pie crusts,  and some yummy chocolate and cheese. 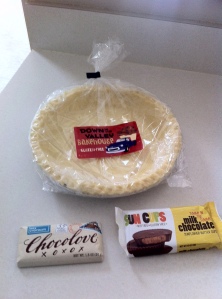 A picture of the crust and had to share that the peanut butter cups are made with sunbutter not peanut, but cost an arm and leg.

I found a gluten free recipe for French Silk Pie but only used the filling part of the recipe, it was on Martha Stewart’s website. I made homemade whipped cream for the topping. It turned out great, thick, rich and creamy. We made stir fry for supper tonight and each had a piece of pie, well I had half a piece Carl ate the rest of mine. 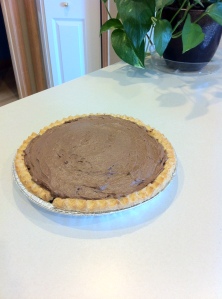 The pie half done 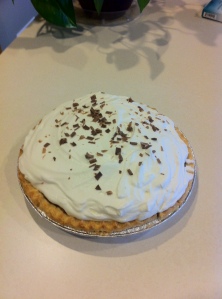 The pie complete and ready to eat, it was a success and delicious.

I hope you all had a great weekend. I think we are in a Blizzard Warning, the midwest is getting hit yet again with snow. Can we be done yet?!

I am in a good book right now and hope to finish tonight. I am back on the reading wagon, almost second book this week.