Well, it has been hot and spicy in the kitchen the last few weeks, for many reasons! 🙂

First, we had the Super Bowl, where we stayed home and watched the game but wanted to make a few snacks. I was hungry for wings and thought that buffalo wings sounded great. Maybe I was hungry for them because they are the number one snack people on the big football day. Carl really wanted Velveeta dip, no thank you. I am not a fan of velveeta dip, I made it once and was not a fan. But Carl got to have his dip. I really wanted wings still.

So I searched and searched online to find a good recipe and I did.

It is a recipe by Guy Fieri called Ain’t No Thing Butta Chicken Wing. Carl really liked them with the sauce, so much so he needed to drink milk. I did not want the spicy sauce, so I made a few wings, just with the dry rub and they were great and had good flavor. 🙂 I did not take a picture, I forgot but I would totally recommend making this recipe. 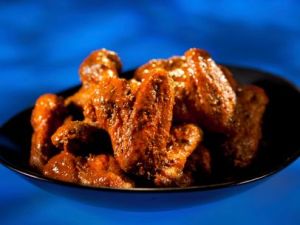 The second hot and spicy meal we made was last night. I found a recipe for Buffalo Chicken Strips. This was a great recipe and will make them again. I added cumin, shredded parmesan cheese to the mixture. They were easy to make and didn’t take long. 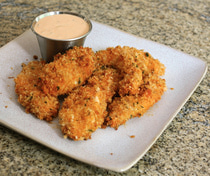 I highly recommended both recipes.