In the last two weeks or so, we have made a few recipes that I would consider favorites and they will go into my recipe binder.

Random side note, I had Chipotle and tried their barbacoa shredded beef in the tacos. Um, I think I might like that a little more then the steak fajita bowl that I get. I asked Carl, why we haven’t made shredded beef like that in the slow cooker yet. So I jumped on the computer to see what I could find.

I found this recipe that was similar to the Chipotle, I do think it tastes better at Chipotle, that just might be psychological. lol I highly recommend this barbacoa beef recipe. You can make it spicy spicy or more mild, that is the nice part of the recipe as well. 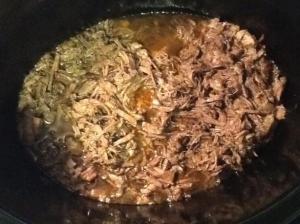 We made this for the second time yesterday. A few learning lessons; the first time I made this, I used a roast with less fat, I cooked it for 8hrs as I made it during a work day. We also felt that if you could make the meat and then let it marinate in the juice for another day in the refrigerator it was even better. We made this for the second time yesterday, We had a roast that had a little more marble in it and we had it in for 6hrs (which says in the recipe) however, we noticed that it was tougher and didn’t just fall apart. Carl shredded it and then put back in the slow cooker and it did get better. I would cook it the first way again next time. This will be a staple to make. Yum.

The other recipe that we made was a Parmesan Chicken recipe. We made one about a month back that was in the oven with marinara sauce. This one was on the stove and super easy. I will definitely make it again and I like how crispy it was. We didn’t make the dressing with it.

I highly recommend this recipe, we made it with boneless chicken thighs and was delicious.