Here a few recipes that we have made in the last month or so.

This was chicken and lime soup. This was good, but to give more substance to the soup, I added rice. Carl did say, next time if I make it, I have to thicken the sauce a little more. It was fresh and light tasting.

This recipe is from Budget Bytes, I love her blog, I have cooked other recipes from there before.

Last week, I found this recipe on Pinterest. Carl really likes orange chicken, this was easy, made a lot and I made it gluten free. I liked that the sauce was only 3-ingredients. I did use the whole jar of orange marmalade, I didn’t want a strong BBQ sauce taste. This is from the Blog Crafty Morning, I haven’t cooked from there before.

I had to share these photos from August when my family got together at my parents house up north! So all my sisters are amazing cooks and I love when they share that with us. 🙂 She made us homemade individual pizzas.

A while back I made this chicken recipe, it was really easy and delicious with lots of flavor. I found it on Pinterest! That app that pretty awesome and all the stuff you can find on it is so mind blowing. I must say, I hate when I find a cute outfit and then there is no place to buy it! lol

Anyway, back to the food!

Carl really liked the lemon flavor that this had and the cream sauce with the chicken was good not to think. I did not modify the recipe, only used gluten free pasta and flour. I highly recommend this recipe!

Last weekend Carl’s parents and sister from the west coast came to our house for lunch. His sister hasn’t seen the house at all and his parents haven’t seen it since when we moved in. We have made a lot of changes and done a lot of things.

I wanted to make a yummy lunch, so I went to the one place that I knew I would find a good recipes. I knew Carl’s sister would appreciate and crave a good midwest homemade meal; which consists of meat, potatoes and veggies.

I settled on the following:

PW’s Smothered Pork Chops This was an easy recipe and full of flavor. It was the epitome of midwest food.

PW’s Crash Hot Potatoes I have been made these a few times before and are easy and taste so good. I added rosemary and thyme.

The Recipe Critic Roasted Lemon Parmesan Garlic Asparagus  I just made this asparagus recipe a few weeks ago and love it. It is fresh and has lots of flavor.

It was a great lunch. Carl’s mom was in charge of dessert and she rocked it! I have had it before but it has been a long time so it was nice to have it again.

It was strawberry pretzel dessert! Delicious!

We had a great Sunday lunch filling our bellies and enjoying each others company! 🙂

I highly recommend all the recipes! Pioneer Woman never disappoints, I have hooked my mother-in-law and sister-in-laws on PW!

It also got Arie’s stamp of approval, he was licking his chops!

I found this recipe a few weeks ago on Pinterest and had to try it. Carl really liked it; it was easy to make and had good flavor. 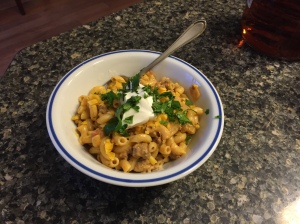 Here is the link for the recipe- Taco Pasta Dinner

The last month or so we have been busy with house stuff. So I have been trying to find recipes that are easy to make but last a few meals for us.

This was really easy to do and it was perfect in my Le Creuset. I doubled the recipe so we had some extra.

Carl really liked it. He said the dijon mustard and tomatoes were a great addition. I also made it gluten free by substituting a few of the ingredients.

I highly recommend this for a quick supper.