We had July 4th off for Independence Day and we did not have any plans or really any destination. We thought we would go to Costco to get our groceries because it is holiday, hoping no one would be there. We also had a plan to go to Ikea to look for a shelf to go put blu-ray player on so we can push Aries kennel into the corner further.

Well, good think I texted my sister and said “We’re off to Costco”, Because she messaged back and said, “They are open on the 4th?” . This prompted us to check their website again quick before leaving the driveway. Low and behold they were closed, which was just fine. We did a change of plans and went to Caribou and drove to Ikea to look for a shelf. We found a great shelf that is perfect in the spot we needed it for. While waiting in the check out line, I spotted this bright green freezer bag that I thought would be great for groceries. It was only $5.99, so worth it, that we are getting a second one!

The outside has mesh compartments and a zipper pocket and the inside also has mesh pockets. Can’t beat a purchase like that.

After leaving Ikea we stopped at the meat market and Cub Foods for supper to throw on the grill.

We got home and put our shelf together and then met my brother and his family to go to the parade and walk around. It was fun to watch the parade through the excitement of my nephew.

After the parade, we went home to clean and organize our closets for our bulk items we would have from Costco.

Then we relaxed outside for the rest of the afternoon/evening and enjoyed each other’s company and played ball with Arie of course, his favorite game.

The supper we decided on. 🙂 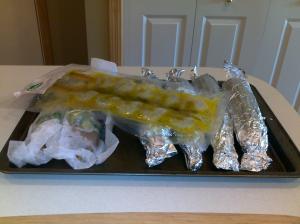 It was a great supper for July 4th and all gluten free. We watched the fireworks from our front sidewalk and saw them from about 10 different directions. Our only complaint, they none of the spots were consistent in lighting. After about 30-45 mins we were starting to eaten up by the bugs and went inside. Arie did fairly well with the fireworks, we left the TV on inside to help with the noise.