My best friend is a photographer and she takes our Christmas card photo every year and her forte is kids. So we asked her to do Cameron’s newborn photos and his first year of milestone photos. She came to our house about a week after he was born and took photos. They turned out so cute!

I thought naming our dog was hard, I was wrong. Naming our peanut was so hard and stressful. He didn’t have a name until when we were getting ready to be discharged from the hospital and I had to tell Carl to pick. Our top name was taken by a relative in the family and we had to go back to square one on our list. We had about 3-5 names  and Cameron was in our top 3. That was the name that fit our little man the best. We wanted a name that when we were yelling his name in the neighborhood it would sound good. We wanted a name that when it was being announced at sporting events it would sound solid. So Cameron it is! His middle name is Carl’s middle name and Carl’s dad’s first name. When we picked Cameron, we didn’t know too many of them now we hear that name everywhere. He definitely looks like a Cameron. 🙂

We are so in love!

Life has been crazy. Christmas snuck up on us and then was gone even quicker.  After Christmas I got super sick for over a week and being pregnant and sick is not fun. We didn’t do anything for NYE, I don’t think we even watched the ball drop. We are party animals can’t you tell. I haven’t blogged in a while so this is a hodge podge of photos.

The end of the year was good, minus being sick. The best was to come and sooner than we would have known. 🙂

This year our Christmas/maternity photos were last minute and my best friend Teri took them again for our 4 year. She took them and had to edit them before she went on her trip to Hawaii plus she had a 2 month old! Can you say superwoman. We didn’t have much snow at the time and it was super cold. We decided this year to do it at a tree farm which was really fun! This is our last Christmas photo with just us and Arie.

Here are some of our photos!

Little did we know that our peanut was going to be coming very soon. We made it home for Christmas. We did the drive in a day, we wanted to make sure we were close to home. What a year 2016 was, we purchased our house and 4 months later found out we were pregnant. We did not know that we would be spending a lot of our time the next 9 months at the doctor making sure our peanut was healthy and growing. We were so blessed in 2016 and didn’t take any of it for granted.

This room was the guitar room for Carl and workout room for me. It didn’t last long and it had to make the transformation to the baby room. We had it painted gray and were perfectly fine with that, we wanted pops of color with wall hangings to other things in the room. We wanted to make it easy to change as baby grows up. These photos are from early November, I will have to take an updated one with all his stuff in the room. I don’t know where to put everything. LOL 🙂

What a busy last month we had. We have seen family and friends a handful of times and that has been great. We have tried to make down time for ourselves, like puzzles! We have had awesome FISH FRYs (I wrote it in all-caps because it is that exciting for me because my fish are gluten free), went to the Lion King Musical and have been enjoying summer!

Here are a few photos!

Here are a few photos and adventures that we have had since summer has started!

Here are a series of photos over the last handful of weeks of Arie. He is so spoiled and his life is so hard! He definitely likes the new yard because there is so much space to play and it’s fenced in.

We were watching TV and Carl was sitting on the floor and was throwing the ball. He was not paying attention and Arie was waiting for him to throw it. When Carl turned around, this is how close Arie was to him.

A boy and his dog!

Arie is very tall that him and Carl are looking at each other eye level!

This transition has been interesting for Arie. He’s trying to find his “spots” in the new house. In the townhome, he had certain spots he would lay while Carl was working or when we were home. There were certain “lanes” where the ball was thrown.

In the new house it is different for Arie. The floors on the main floor are laminate which aren’t comfortable for him to lay on and downstairs we are still unpacking and putting boxes away. And of course we need to find a “lane” for ball throwing.

Carl sent me this photo. 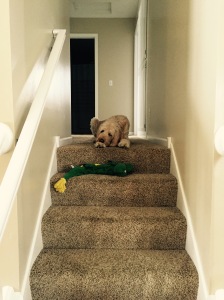 he is sitting at the top of the stairs.

He did this same thing at the townhome; however, the stairs were outside of Carl’s office, not in the new house.

The Monday after we moved, I drove to the townhome to pick up our canvases and other odds and ends. When I walked into the townhome, this is what I saw. It made me sad a little, Arie left his mark in the townhome! What great memories we had! 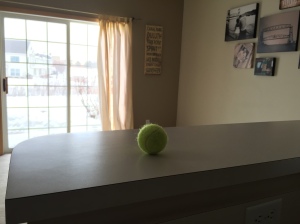 We are trying to fit in at the new house. Sweet Arie! 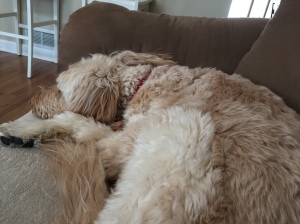